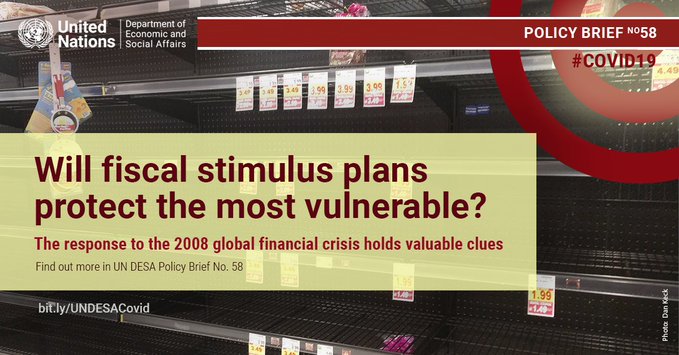 Economic Development 01 April 2020
The global economy could shrink by up to one per cent in 2020 due to the COVID-19 pandemic, and may contract even further if restrictions on economic activities are extended without adequate fiscal responses, according to analysis released today by the UN Department of Economic and Social Affairs (DESA).
The DESA briefing finds that millions of workers are at risk of losing their jobs as nearly 100 countries close their national borders. That could translate to a global economic contraction of 0.9 per cent by the end of 2020, or even higher if governments fail to provide income support and help boost consumer spending.
Struggling service industries
According to the forecast, lockdowns in Europe and North America are hitting the service sector hard, particularly industries that involve physical interactions such as retail trade, leisure and hospitality, recreation and transportation services. Collectively, such industries account for more than a quarter of all jobs in these economies.
As businesses lose revenue, unemployment is likely to increase sharply, transforming a supply-side shock to a wider demand-side shock for the economy. The severity of the impact will largely depend on the duration of restrictions on the movement of people and economic activities and on the scale and efficacy of responses by national treasuries.
Against that backdrop, UN-DESA is joining a chorus of voices across the UN system calling for well-designed fiscal stimulus packages which prioritize health spending and support households most affected by the pandemic.
“Urgent and bold policy measures are needed, not only to contain the pandemic and save lives, but also to protect the most vulnerable in our societies from economic ruin and to sustain economic growth and financial stability”, said Liu Zhenmin, Under-Secretary-General for Economic and Social Affairs.
Spillover to developing countries
Today’s analysis also warns that the adverse effects of prolonged economic restrictions in developed economies will soon spill over to developing countries via trade and investment channels. A sharp decline in consumer spending in the European Union and the United States will reduce imports of consumer goods from developing countries.
Developing countries, particularly those dependent on tourism and commodity exports, face heightened economic risks. Global manufacturing production could contract significantly, and the plummeting number of travellers is likely to hurt the tourism sector in small island developing States, which employs millions of low-skilled workers.
The UN civil aviation body, ICAO, welcomed the commitment by leaders of the G-20 industrialized nations late last week indicating that bold fiscal support was needed to safeguard the global travel industry, in order to aid the global recovery in the coming months.
Meanwhile, the decline in commodity-related revenues and a reversal of capital flows are increasing the likelihood of debt distress for many nations. Governments may be forced to curtail public expenditure at a time when they need to ramp up spending to contain the pandemic and support consumption and investment.
Elliot Harris, UN Chief Economist and Assistant Secretary-General for Economic Development, said the collective goal must be a resilient recovery which puts the planet back on a sustainable track. “We must not lose sight how it is affecting the most vulnerable population and what that means for sustainable development,” he stressed.
‘The alarms raised by UN-DESA echo another report, released on 31 March, in which UN experts issued a broad appeal for a “large-scale, coordinated, comprehensive multilateral response” amounting to at least 10 per cent of global gross domestic product (GDP).
Shared responsibility, global solidarity
The document, titled “Shared responsibility, global solidarity: Responding to the socio-economic impacts of COVID-10,” describes the speed and scale of the outbreak, the severity of cases, and the societal and economic disruption of the coronavirus.
Secretary-General António Guterres launched the report with a dire warning about the scope of the crisis. “COVID-19 is the greatest test that we have faced together since the formation of the United Nations,” he stressed, noting that the virus is “attacking societies at their core, claiming lives and people’s livelihoods.”
The UN Chief underscored the importance of focusing on the most vulnerable by designing responses that, among other things, provide health and unemployment insurance and social protections while also bolstering businesses to prevent bankruptcies and job losses.
The recovery from COVID-19 must lead to an economy focused on building inclusive and sustainable economies that are more resilient in facing pandemics, climate change, and the many other global challenges, he added.

As countries prepare to spend trillions on #COVID19 fiscal stimulus packages, they must:
🩺😷 put health care first
👷💸 support the income of those hit the hardest 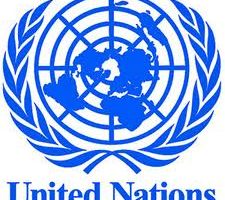 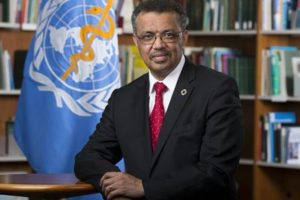 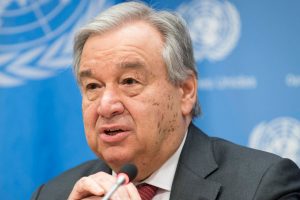 UN chief appeals to ‘common humanity’ across all faiths, in tackling the coronavirus